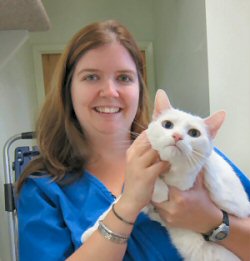 Megan is a veterinary technician here at Morrisville Cat Hospital. She has worked in many capacities in the hospital since 2005 when she started part time. She started as a kennel technician, then a receptionist, then a technician assistant before becoming a full time technician. Her background is in Zoology and Conservation, with a specific interest in Madagascar and lemurs. She works here at Morrisville Cat Hospital because it is important for her to work somewhere that makes a difference. She loves working with a team of people who care and do their best every day to provide the best possible care to our patients and clients. She loves getting to know the patients, some of which she has known from kittens into their senior years, and the ongoing relationships we have with the clients. Even though the job is exhausting some weeks, she said there is no better feeling than helping a sick patient and then watching them go home once they are feeling better! 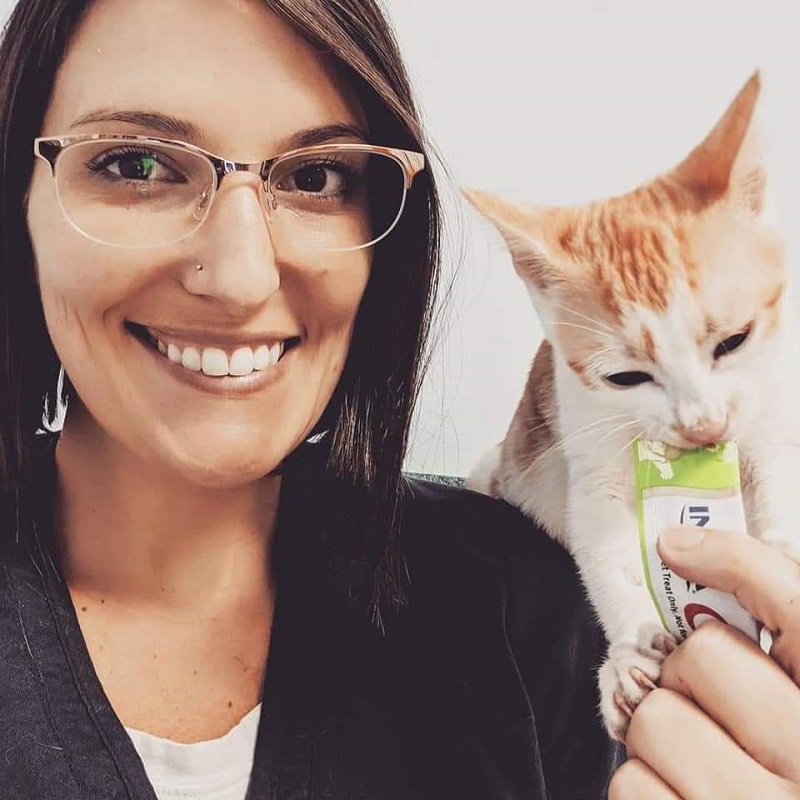 Megan is originally from California and now happily resides in Durham. She has always loved animals of all kinds but had the privilege to learn the love of cats when she was presented with a week old kitten while working as a veterinary assistant in Fuquay Varina. Mason, who was the week old kitten, sparked a passion within Megan to work with the fearful and misunderstood. Mason inspired Megan to go to school to earn an AAS on Veterinary Medical Technology from CCCC and become an RVT. Mason has passed on but her legacy lives in Megan every day. Megan currently has 4 cats: Pig, Louie, Olive, and Sunny. Both Olive and Sunny are from the Paws 4 Ever Rescue in Mebane and came to MCH for medical issues. Sunny has congenital megaesophagus which is a rare issue in cats. Megan has been diligently taking notes and would like to publish a protocol for this very rare illness in cats. Megan’s professional goal is to obtain a VTS, veterinary technician specialty, in feline medicine. In her spare, Megan likes to spend time with her family, expand her houseplant collection, and research for her VTS certification. Megan has certified in BLS and ALS CPR techniques and has a special passion for anesthesia, pain management, and cytology. 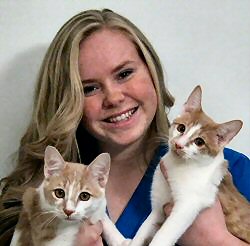 Kaeleigh is a veterinary technician at MCH who joined the team in December 2011. She spent the first half of her life in California but has lived in North Carolina ever since. Kaeleigh acquired her B.S. in Zoology, as well as a minor in Film Studies, at NC State University. A lover of all animals, Kaeleigh gained a larger appreciation for felines after learning more about their specific health and behavioral needs. Kaeleigh was trained at MCH using solely gentle handling techniques and is grateful to be a part of a team that provides low-stress care for their feline patients. Kaeleigh is particularly interested in feline nutrition and behavior, as well as client education and skill training. She can often be found looking at nutritional analyses of various diets and previously helped incorporate more food enrichment recommendations to the clinic after attending the 2016 AAFP conference with Dr. Simpson. Kaeleigh is passionate about ensuring clients feel comfortable with the treatment plans for their cats and enjoys demonstrating and teaching various techniques to provide cat owners with the confidence and skills they need to successfully medicate and care for their cats at home. When not working at the clinic, Kaeleigh enjoys frequenting the local movie theaters, playing video games, and snuggling with her own cats at home. Kaeleigh has two cats, Luke and Chewy, that she adopted from Morrisville Cat Hospital in 2012 when they were kittens. 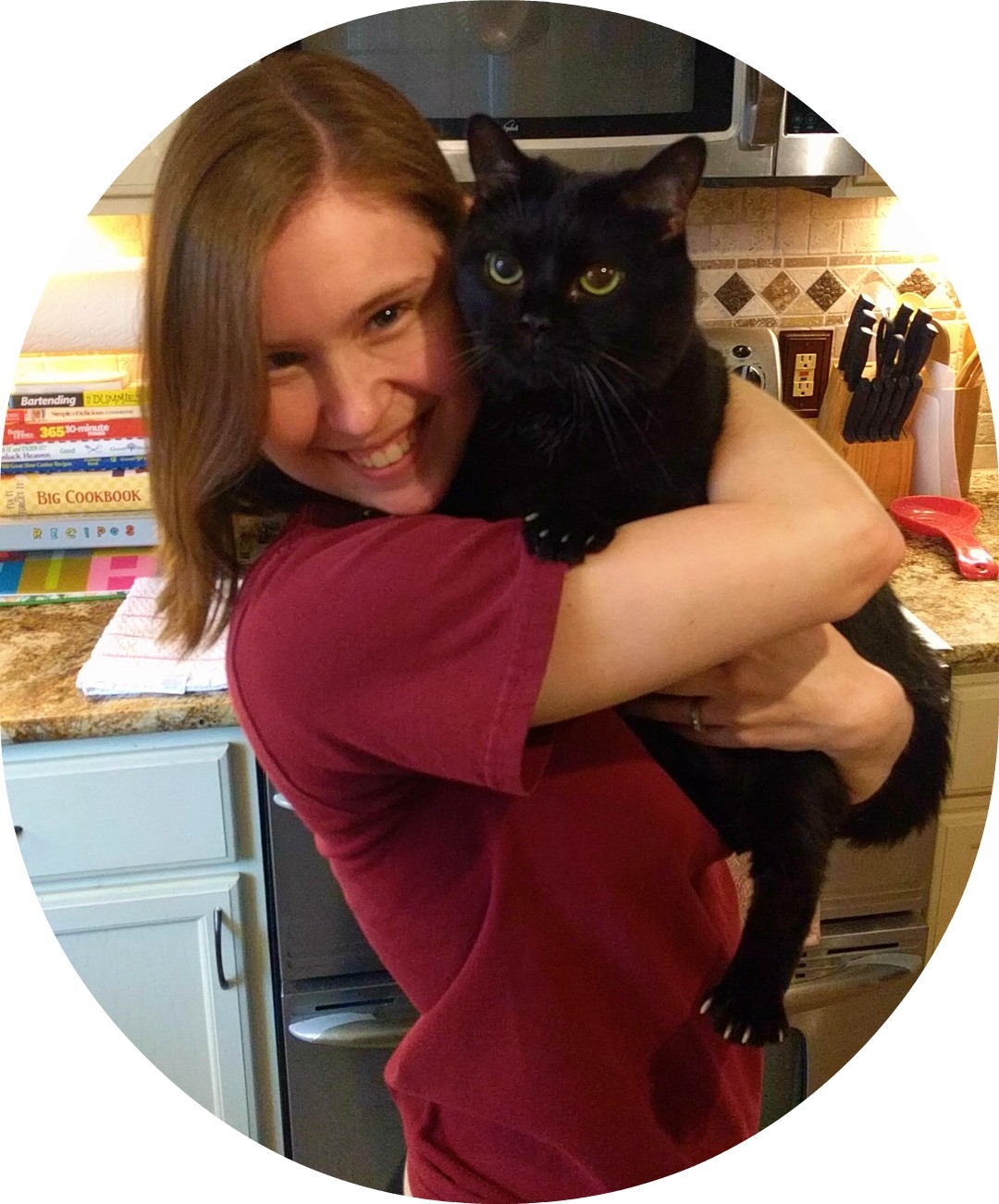 Shawnee is a Veterinary Technician at Morrisville Cat Hospital. She grew up in southwest Virginia as a Hokie but relocated to North Carolina with her husband in the summer of 2014. Growing up, Shawnee was the little girl who frequently brought home new strays. She began working in the veterinary field in 2006 and has been hooked since. Shawnee loves to nurture and care for various creatures of all kinds but cats have a very special place in her heart. She currently has 3 cats named Terra, Vader, and Sparkles, 1 rabbit named Nickels, and a backyard full of domestic ducks. When Shawnee isn’t pampering your kitties here at MCH she is at home caring for her mini-farm and blogging at It’s A Hard Duck Life blog. 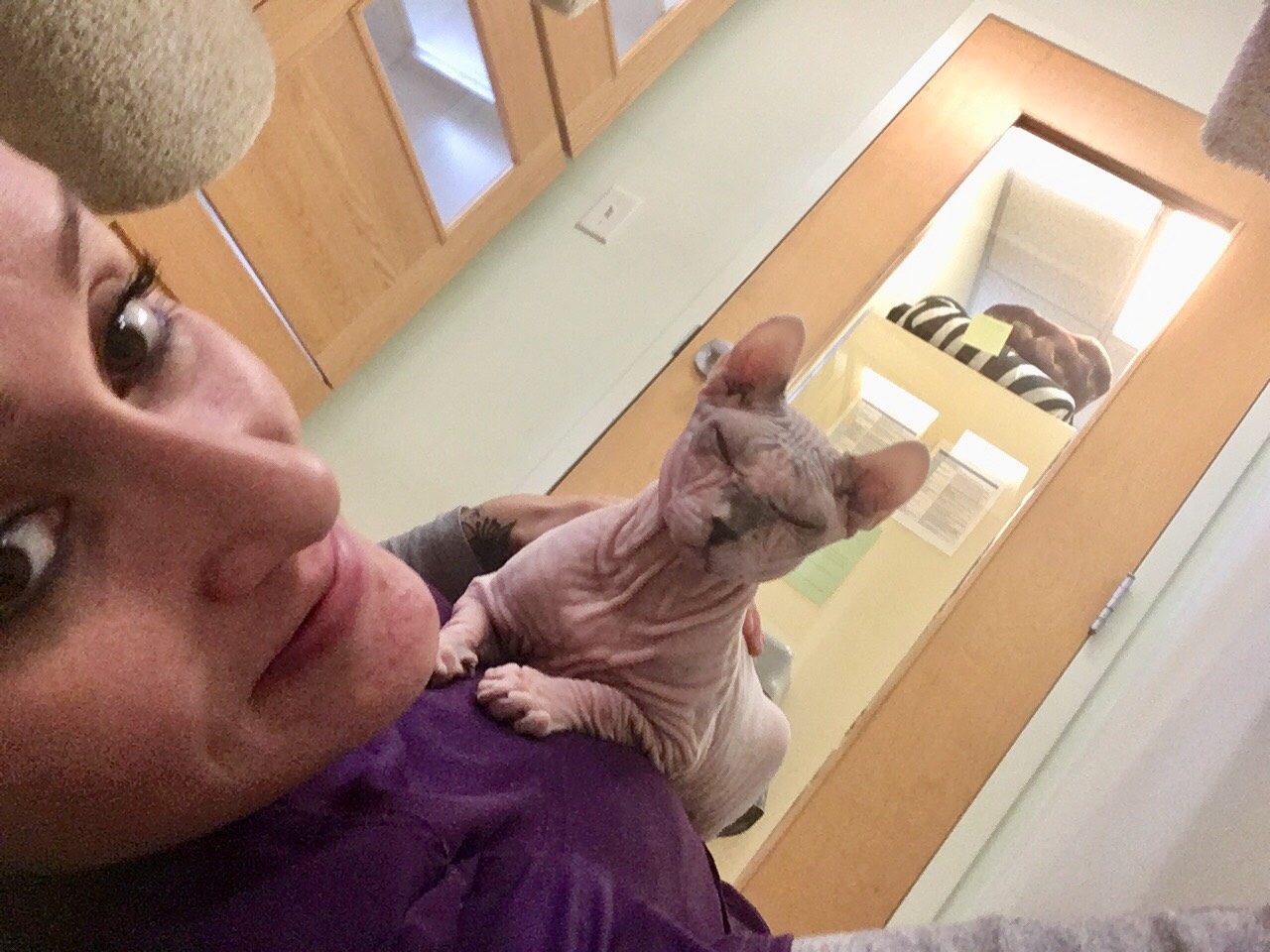 Maria joined Morrisville Cat Hospital in April of 2019 . She grew up across the street from a small farm and developed a strong bond with animals of all types at an early age. She began regularly caring for the animals on this farm during middle school and went on to study Zoology at NC State University. During her college years, she worked with a mobile vaccine clinic that mainly catered to dogs, began pet sitting around the Raleigh area, and started volunteering at a local farm animal sanctuary. When not working, Maria enjoys plant-based cooking and outings with friends and family. She has 4 furry children—two pups named Cookie and Apollo, and two bunnies named Lorelei and Sir Hopsalot. Working for MCH has made Maria realize cats really do rule, so she is hoping to add a meowy friend to the family in the very near future!

Get In Touch With Us Today